All posts in Photography

SackBoy reaches page one on Google!

Possibly one of the more randomly proud moments of my little project’s life is the knowledge that in under a year I’ve hit the first page of Google for the search term “sackboy”.

With just under 500 images in the photography project (seriously, 500th image anniversary coming up in June!), I’ve hit well over the original target of “an image a day for the next year”. It hasn’t even been a year yet. It’ll be a year in August sometime.

And now, the random news that I place fourth on a Google search for “sackboy”. 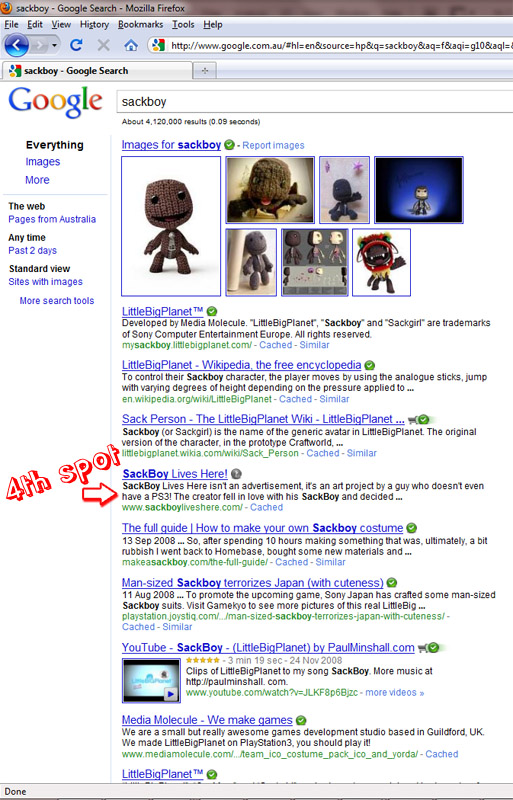 The ridiculous thing? I’m even above Media Molecule’s entry on that page, and they made the bloody game!

Apologies to Media Molecule if they’re at all offended by this. I run this project to spread smiles and laughter since SackBoy seems to make people smile. 🙂

Check out the SackBoy Lives Here project at www.sackboyliveshere.com

If you weren’t walking around the city last night, you might not have seen that the light and art festival that is Vivid has started.

So far, I haven’t walked around much of the festival. It goes for a month starting from yesterday and ending on June 21, probably with some sort of drama like last year. There was a boat on fire that everyone wanted to see that night. It turned out it was more exciting to imagine a boat on fire. 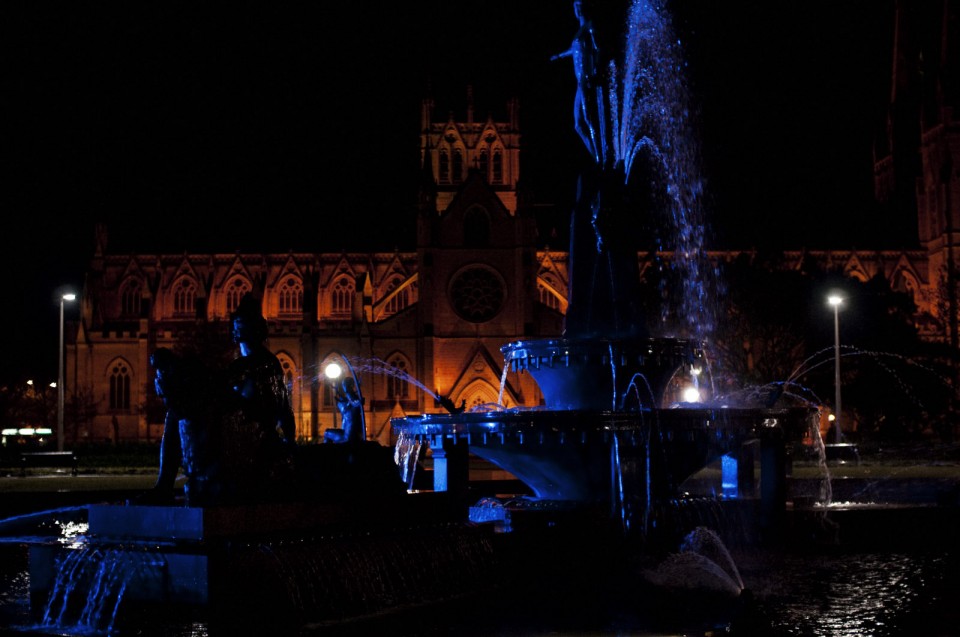 This year, I’m seeing a lot of blue.

Maybe that’s because blue is in. Perhaps people have finally got the hang of the death star blue light from the original Antec Sonata (oh yes, I am THAT much of a geek) and now they’re saying “hey look, I can do that too”.

Or maybe they’re all being anti-drug and setting up black lights that come out as blue to stop people injecting in the street. Because people do that. Or don’t. 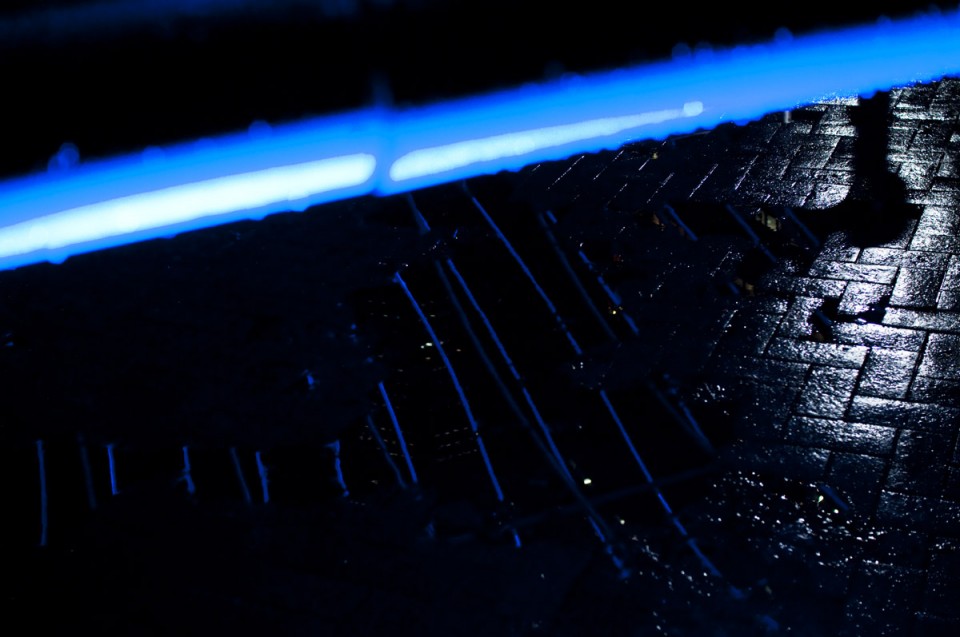 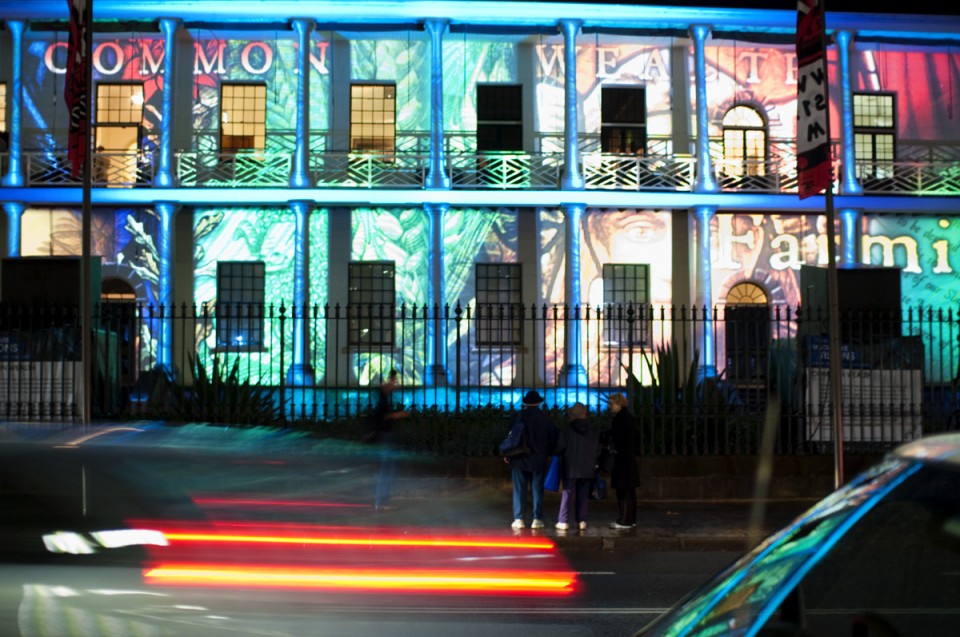 I’m not sure why you’d take a hit of something by state parliament. Maybe you lost a cause or something. I’m fairly sure taking a hit won’t help you find it again.

Regardless, Vivid’s on now throughout the city of Sydney. Have a walk through the town at night and take a gander. If you see anything that looks out of place, chances are it’s for Vivid. Or the Biennale. Or an expo. Or… actually, there’s lots of reasons why something can look out of place here.

Ignore that last statement. Instead, adhere to the following: go to the light! 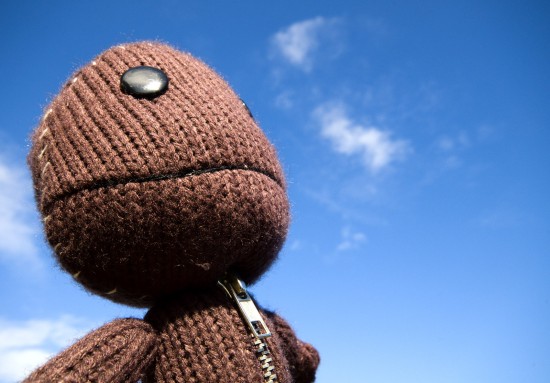 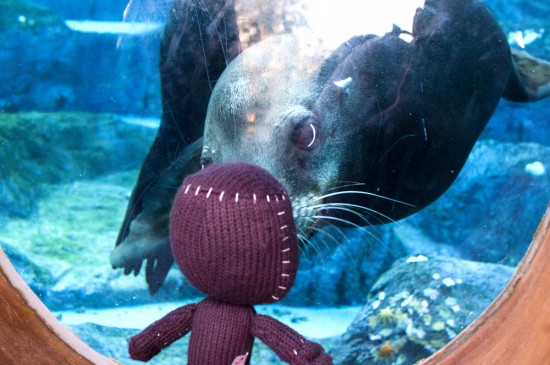 If you actually visit my site (which doesn’t have a lot on it, apologies… sorta going through “stuff” at the moment), you may have noticed a few things on the top have changed.

One is that I now have a CV up there… so you know, if you’re looking to hire me, use that and my review list to determine if I have any worth (to you; I have worth, you just might not see it for your purposes).

The other is that I’ve now relaunched my gallery under a different system. It’s taken a few weeks and it looks very shiny. Apologies to people suffering for loading images, it can be seen as a fairly bandwidth intensive site but I like the look & effect of it.

As of yesterday, however, I’ve modified the WPTouch default theme / plugin for WordPress and now have a mobile version of my gallery running. 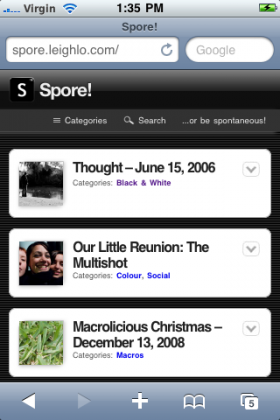 To see it, simply type “spore.leighlo.com” (without the quotes) into your mobile’s web browser. I’ve tested this on Safari on the iPhone but if you’ve got other devices, feel free to tell me how it looks.

More images of it after the jump…

END_OF_DOCUMENT_TOKEN_TO_BE_REPLACED

Your grapevine is chewing up my mind. 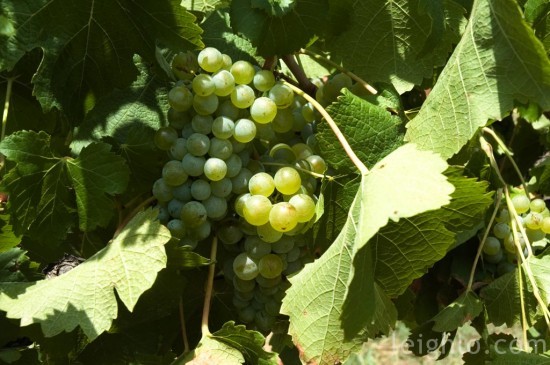 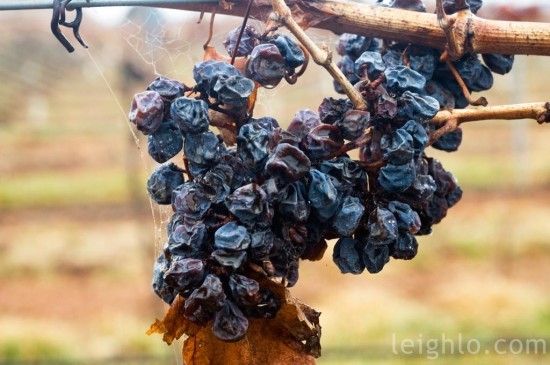 Ok. So that was mostly a way of putting pictures of grapes on the screen while I made a parody of the old Josh Abrahams song “Addicted To Bass”. But I bet you didn’t know that it was also a test for the Talkr plugin I’ve currently got installed on this blog that lets you listen to the blog.

Go on, click the bit that says “Listen to this post” to hear the crazy computerised voice of Silicon Sarah* (not her real name) sing “Totally Addicted To Grapes”.

Or say it, anyway. 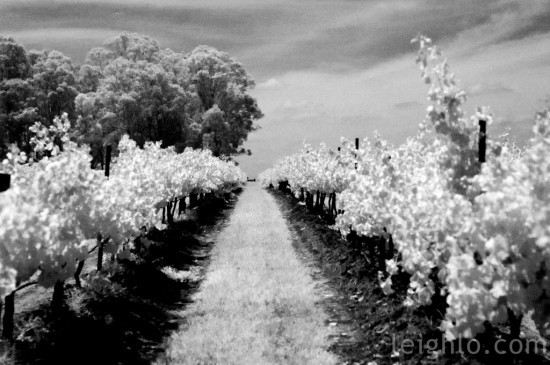 Here’s an infrared photo of a vineyard in the Hunter just in case you’re still annoyed at the lack of parody lyrics I’ve provided.