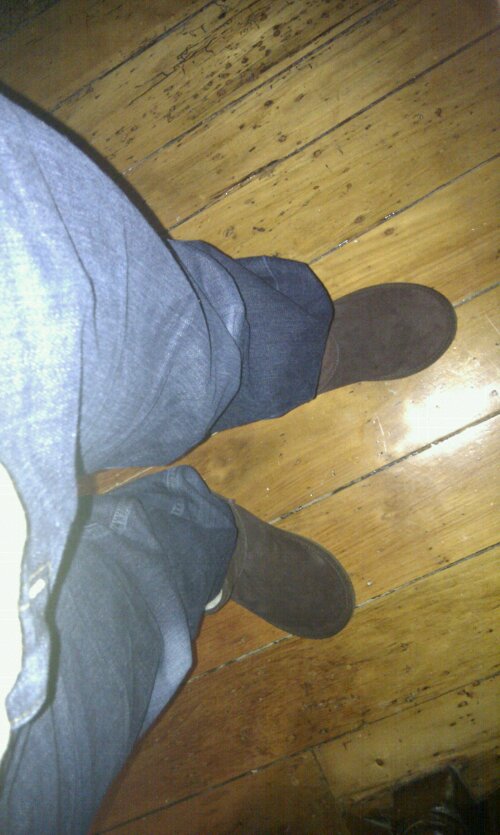 They rock. My first Ugg boots. So comfy.

When APEC goes, the sun comes out

You simply could not ask for a more beautiful Sydney day than what was seen on Saturday, September 15. The weather was quintessential Sydney: warm temperature, deep blue skies sparing us of pretty much any clouds, and a nice pleasant breeze drifting on by to greet those of us who ventured out of our brick & concrete coffins this fine day.

Compare that to the weekend of last, one where violence was expected but peace prevailed. Twenty-one world leaders gathered in the military dictatorship of Sydney to talk affairs and enjoy the scenary (or the bits of it that had been closed off from the public by large unfriendly fences with armed guards at almost every point).

On that day the sun was shining, the birds were singing, the bees were hastily informing us birds and bees don't make the best of lovers and… — oh yes… There were clouds all over the sky. Big dreary puffs of white and grey stretching all over the horizon and back.

And that was to be the irony of APEC. No one wanted it here except for the Prime Minister. Not even the weather wanted APEC here.

Saturday was different. Where APEC saw people out in full force as the masses marched their peaceful protest, those individuals were out enjoying the day in parks, in shopping centres, eating and drinking.

I went into the city myself and looked at those Onitsuka-however-the-fuck-you-say-it Tigers that I'd blogged about only days prior. And damn, are they comfy.

They put my Cons to shame and even rock the ledge that held the retro Gola hi-tops as my most comfy shoe ever. Originally said to cost $180, they were only $80 where I got them and if I end up really loving them this week, I'll be tempted to grab a second pair. From the first moment of putting them on, you can instantly tell how damn comfortable they are.

I think that I'm not really a "clothes" sort of person. I don't know what to do with clothes. I can't pick them or coordinate them; all I can do is merely wear them. But what I do seem to like is the accessories: the hats, the shoes, the watches. I like looking and wearing the add-ons.

I suppose on a day as beautiful as this I shouldn't be writing about the material goods that I've bought and have fallen for. I should be writing about the vibrant green of the grass with its fresh smell filling my lungs with the pure air only being outside can provide. I should be describing the clouds, the sky, the people, the moods, the bottles of Coke & coffee cups as people picnic in the park, and the kids running to scare away the pigeons only looking for a bite to eat.

I suppose I should… But it's my blog and I'll do whatever I damn well please. 😛

While I've now been back in Australia for almost a decade, I'm only now realising the extent to which my Texas-isms are surfacing.

When I lived in Dallas all those years ago, I was determined to keep the Australian in me even though I truthfully had no idea what it was.

It seems like only yesterday that I left that place. I can still remember where I lived, the long and wide Greenville Avenue and how crossing it in the summer meant certain death or a new cd at Blockbuster Music. I remember where the school bus stopped in Freshman year and how it meant walking back along the Tom Thumb Trail, a path alongside The Village apartments that let me bypass everything until I crossed Southwestern Boulevard back into the place we lived in.

When I lived in Texas, I was proud of my "g'day" though truthfully it's a word I rarely use. Everyone would use the word "ya'll", another contraction that I wasn't sure about so never used it. It was decidedly Texan and that wasn't me at the time.

So the first time I stepped off of the plane back in Australia, can you guess what was in the smattering of first words?

These days I've more or less come to accept that it doesn't matter what my vocabulary is. I use all sorts of words from all sorts of places. I literally follow a random habit of ways of saying hello using a combination of "howdy", "aloha", "hi", and "g'day".

It didn't take long to be back in Australia before a Texan accent I didn't even know I had to start asserting itself into my speech patterns. Now I alternate at random times. I can control it but choose not to.

And so I come to the latest Texan body part that's deciding to spring up on my body without even the faintest of warnings: cowboy boots.

A couple of months ago, I had a strange craving for cowboy boots. I wanted to wear them out with a ten gallon hat and put my thumbs into my pockets like all good cowboys do.

I was to be Shane. I was John Wayne. I was going to be that guy who rode out on the horse at the end of a gunfight only my horse would be a Sydney bus, about the same speed as a bus but easier to ride home drunk on.

And then I looked for boots. And looked and looked and found some but somehow couldn't justify over $300 for a pair of boots I'd never tried and would have to be purchased over the Internet.

Last weekend, however, fortune favoured the Freak as my Mum's boyfriend Brad dug through his closet and found a pair of cowboy boots he didn't want anymore so rather than throw them out, he gave them to me.

I've put in some new interior soles and I'm wearing them now. All I need now is a ten gallon hat. 😛