As I headed back home from the city this morning, smoke caught my attention.

Being the oh-so-intelligent human that I am, I of course headed straight for the smoke to see what was up. You know, because we’re smart us humans: we head straight for death when we see it. 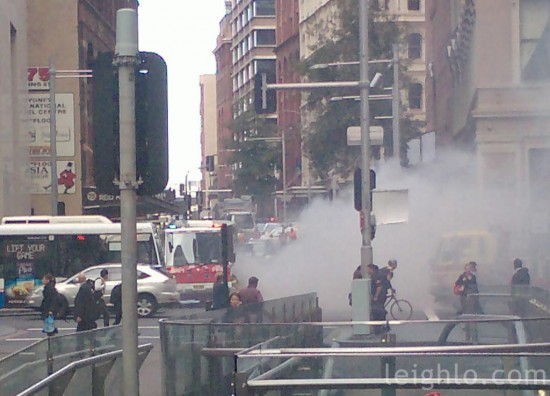 But there wasn’t any death when I arrived. Just a car on fire.

That’s a Ute on fire. What looked like a Holden Ute from what I could tell. And it was spewing its thick white smog at everyone it could find.

Sitting next to the Apple Store, it was beginning to make the crystal clear windows looks more like the titanium white coating that shells the iPod, old Macbook, and the people unlucky enough to prefer a white iPhone. 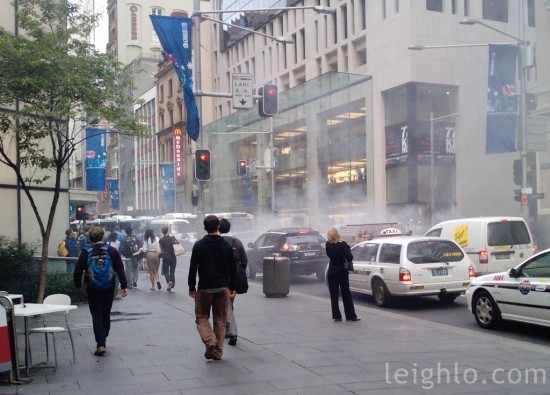 It’s pretty amazing that a car that small creates a smoke that heavy. Still, don’t recommend the smell over clean air. Wow, did it smell bad… 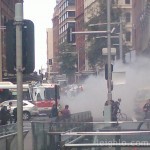 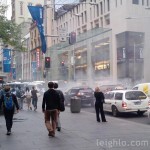 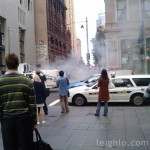 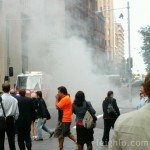 The one thing that surprises me about Apple is their inability to actually release what the market wants.

Take for example the iPod. While not the first or the original mp3 player, it is the one that everyone remembers. It's smooth, simple, and white. The iPod face hasn't really been changed throughout its life and most iPod devices – short of the Touch models – still look like they've evolved from that original first-generation hard drive front wheel model.

And yet not a single iPod supports FM radio yet. Nor do they support other audio formats. Or drag & drop folder support.

Almost every single media player under the sun has all of these things except the Apple iPod. If Apple had actually gone ahead and put these features into their devices, they'd have an immediate winner. No one would bother going to another brand because there'd be need to.

People would hail from the streets "Did you hear about Apple's new iPod? It does everything!" and there'd be no reason to buy anything else.

Currently, I'm writing this article and blog entry on a Mac while riding a bus on the way home.

I'm using my MSI Wind – a Netbook that comes out of the box with Windows XP installed on it. While white like a MacBook, it certainly isn't one. At 10 inches on the screen, it's actually a fair bit smaller than a 13.3 inch MacBook and almost half of what the MacBook Pro 15 and 17 inch models pull out with.

The MSI Wind I'm using hasn't been upgraded from its original specification and is currently sitting fine on 1 gig of memory and an 80 gigabyte hard drive. I have put in a 16GB SD card for extra solid-state storage, but that hardly affects storage so we don't need to talk about that.

What I have done however is replace one of the partitions on the original hard drive with an installation of Mac OSX… and damn, is it good.

From the start, I should mention that I've been hanging out to buy a laptop for a while because I'm one of those bastards that wants Apple to release a smaller notebook. I ultimately want a tablet model, but I'd take a smaller notebook like their older PowerBooks had.

Apple haven't exactly been forthcoming. They keep dodging my needs and telling me that I should buy a 13 inch MacBook. Why would I want to spend so much money on a 13 inch notebook? I can't carry that around easily.

So before I left to Singapore, I got one of the MSI Wind laptops, a computer I have been waiting for because it looked like the Netbook to get.

Running both Windows XP and Mac OS is the dream of many a geek and this thing runs them quite happily. While not as fast as say a high-speed Windows PC or MacBook Pro, it doesn 't have to be.

My Hackintosh runs both XP and Mac OS, the only two operating systems I give a rat's arse about. How brilliant is that!

As we approach the launch of the third generation Apple iPhone on sale tomorrow, I feel a need to talk about something close to this technology journalist's heart: fanboyitis.

For those that don't know, fanboyitis occurs when people are so obsessed with a product or brand that they cease the ability to become objective. The part of their brain that determines and coordinates reasoning is shut off and they become defenders of the product or brand as if its being assaulted or raped and someone needs to step in as the voice of reason.

Which wouldn't be them.

END_OF_DOCUMENT_TOKEN_TO_BE_REPLACED

I've had these on my mind for a few days now… and with a few hours to go before Steve-day, I might as well share them.

Let's see how wrong I can be…

The new generation of iPhone will keep with the recessed headphone jack
Let's see… the current iPhone has a recessed jack and has forced several companies to adopt a longer prong for their headphone cables. If people are forced to use the crappy-ass Apple earbuds (and they really are irritating), then more people see the signature white earbuds everywhere and the Apple iPod mentality spreads…

If the headphone jack isn't recessed, Apple will announce a remote for the iPhone
The iPod already has one… so why not the iPhone. Seriously, that little button on my headset just isn't good enough. Suppose I want to change tracks? I have to pull the iPhone out, unlock it, and hit the track I want. And a remote would give me the headphone of my choice with the mic built into the remote! How easy would that be!

That's it. I'm sure there'll be things like A2DP and A-GPS and 3G… but I just want the damned thing to come out here so I can buy screen protectors and a new headset for mine.

One not made out of Apple's earbuds. They suck.

While I pass through Oxford St on the way home regularly on my bus, I'm usually too asleep to notice anything.

As a result, I might be a little late with the following information:

Apple have taken put several billboards -and by several, I mean ALL of them – to advertise the Apple iPod.

Now last I checked, the iPod brand already had the biggest market share of mp3 / media players on the street.

You see them everywhere. People with new generation earbuds and people with old generation ones, their white cords tagging along in front of them as if someone were about to silhouette them and make a commercial selling a device starring them.

So unless Apple are pushing for world domination (which they probably are) or a law outlawing the use of any non-Apple media player, a complete buyout of iPod advertising at one of Sydney's most expensive billboard junctions suggests the following:

Deny all you want, Apple. We know the truth. The 3G truth.